A Tale of Two Valleys 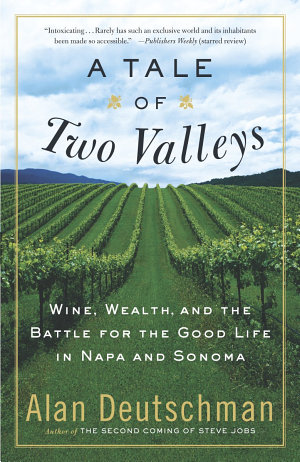 GET BOOK
A Tale of Two Valleys Book Description:

When acclaimed journalist Alan Deutschman came to the California wine country as the lucky house guest of very rich friends, he was surprised to discover a raging controversy. A civil war was being fought between the Napa Valley, which epitomized elitism, prestige and wealthy excess, and the neighboring Sonoma Valley, a rag-tag bohemian enclave so stubbornly backward that rambunctious chickens wandered freely through town. But the antics really began when new-money invaders began pushing out Sonoma’s poets and painters to make way for luxury resorts and trophy houses that seemed a parody of opulence. A Tale of Two Valleys captures these stranger-than-fiction locales with the wit of a Tom Wolfe novel and uncorks the hilarious absurdities of life among the wine world’s glitterati. Deutschman found that on the weekends the wine country was like a bunch of gracious hosts smiling upon their guests, but during the week the families feuded with each other and their neighbors like the Hatfields and McCoys. Napa was a comically exclusive club where the super-rich fought desperately to get in. Sonoma’s colorful free spirits and iconoclasts were wary of their bohemia becoming the next playground for the rapacious elite. So, led by a former taxicab driver and wine-grape picker, a cheese merchant, and an artist who lived in a barn surrounded by wild peacocks, they formed a populist revolt to seize power and repel the rich invaders. Deutschman’s cast of characters brims with eccentrics, egomaniacs, and a mysterious man in black who crashed the elegant Napa Valley Wine Auction before proceeding to pay a half-million dollars for a single bottle. What develops is nothing less than a battle for the good life, a clash between old and new, the struggle for the soul of one of America’s last bits of paradise. A dishy glimpse behind the scenes of a West Coast wonderland, A Tale of Two Valleys makes for intoxicating reading.